Thank you for sharing with me the good news of your experiences with meeting foreigners and the recent demonstration and also the wonderful photographs. Please can I share them with my many friends in Ireland who are sincere supporters of Catalan Independence. Indeed you look like and Irish Republican - well done - I think the questions you received from foreigners regarding the Irish flag are very important to make visitors aware that the Independence movement in Catalunya has the support of many people in different countries. I think that visiting tourists are very interested in your struggle and there is tremendous support and affection from anyone who has ever visited BCN and Catalunya. Believe me is is very easy for a foreigner like me to have great affection for Catalans and I know that when they return they will tell the story to their friends of the Catalunya My friend John after his recent visit was deeply impressed by the friendship of your people.

Trenbane 07
Sent from my iPad

Yesterday I was in a independentist’s concentration in Sant Jaume square in Barcelona.

I wore with proud the Irish flag you gave me as a present. Many people asked me what was the mining as if they didn’t know the Irish history. 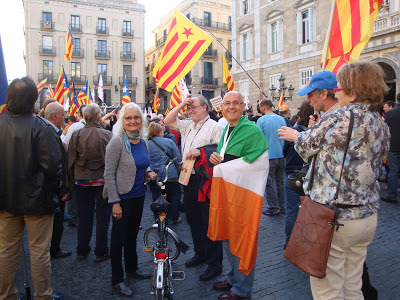 An Irish’s couple, visiting BCN, asked me too. They were from North Ireland, and didn’t understood why a Catalan man was wearing an Irish’s flag.
I told them an explanation.
At least the man knows the Catalan-Spanish situation. Good people.
Other Germany couple asked Mª Angels about your flag in a independentist’s Catalan concentration.
Yesterday, I felt important and lived the moment with proud of you and your country.
Your Irish’s flag has been a wonderful present. Thank you  very much.